Most Americans probably don’t realize that we have a very limited understanding of the first Thanksgiving, which took place in 1621 in Massachusetts.

Indeed, few of our present-day traditions resemble what happened almost 400 years ago, and there’s only one original account of the feast.

As an anthropologist who specializes in reconstructing past diets, I can say that even though we don’t have a definitive account of the menu at the first Thanksgiving, letters and recorded oral histories give us a pretty good idea of what they probably ate. And we know for a fact that it didn’t include mashed potatoes and pumpkin pie.

A main course of waterfowl and venison

The main course is the one scholars can speak about with certainty.

The only eyewitness account of the first Thanksgiving comes from a letter written by Edward Winslow on Dec. 11, 1621. In it, he describes how the Puritans, after utilizing fertilization methods imparted by Tisquantum (also known as “Squanto”), had their first successful harvest. To celebrate, Governor William Bradford “sent four men on fowling” and they returned later that day with enough food to feed the colony for almost a week. Since waterfowl was plentiful in the Massachusetts Bay area, it’s widely accepted that they were eating goose and duck rather than turkey.

The letter also recounts that the Wampanoag leader Massasoit Ousamequin was present, along with “some ninety men,” and that they gifted five deer to the governor. Therefore, venison likely had a prominent place alongside waterfowl on the first Thanksgiving table.

Not cranberry sauce, but sobaheg stew

The natural bogs of the the region contained wild cranberries that could be dried and used all winter to bring variety and vitamin C into the diets of the Wampanoags. They even have their own holiday, Cranberry Day, that resembles our Thanksgiving.

However, there’s no account of cranberries at the first Thanksgiving, nor is there any mention of cranberries in other records of foods introduced to people who arrived on the Mayflower.

This may be due, in part, to the location of Plymouth Plantation relative to the boggy regions of Massachusetts, which are several miles away.

If bogs were not in the immediate area, then the fruit may not have been as readily used by the Wampanoags of this region as they were in other places with Wampanoag settlements, like Martha’s Vineyard.

Instead, for a side dish to the main course, a stew called sobaheg was most likely served. An easy way to make use of seasonal ingredients, the stew often included a mixture of beans, corn, poultry, squash, nuts and clam juice. All are used in the traditional dish today, and all would have been available in 1621. In fact, clams, fish and other seafood were abundant in the area, so they were probably present in some form, whether in sobaheg or another dish.

For carbs, look to cornbread, not potatoes

Historians attribute the first New England crop of potatoes to Derry, New Hampshire in 1722, so there’s no way mashed potatoes could have made an appearance during the first Thanksgiving.

Corn, on the other hand, was the staple starch of the time, and in the published notes of William J. Miller on the Wampanoag tribe, he indicates that among the foods introduced to them, the corn bread, called maizium, was “kind.” European settlers didn’t often speak favorably of indigenous food, so mazium stands out as a recipe that likely made it onto the table at this first feast. 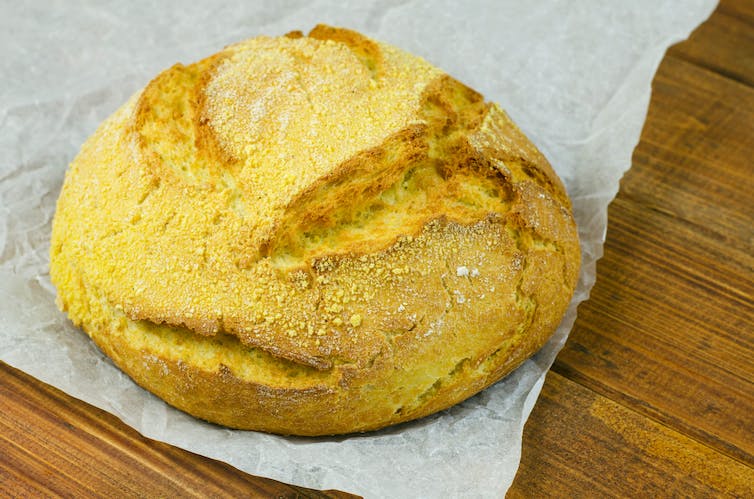 Potatoes weren’t around in 17th-century New England, but corn was plentiful.
Natalija Sahraj

Although the settlers may have made a gravy out of the drippings from the meats procured for the feast, a common staple for these early colonizers was a dish known simply as “green sauce.”

Although the best accounts of this sauce come from later records when households had their own gardens of European crops, recipes also utilized crops introduced to them by the Wampanoag. In addition to the corn (and barley) mentioned in Winslow’s letter, the harvest of 1621 likely included beans, squash, onions, turnips and greens such as spinach and chard. All could have been cooked at length to create a pulpy sauce that later became a staple in early New England homes.

A regular supply of sugar or maple syrup wasn’t available in the area until much later. Sugar, which was the major export of Caribbean plantations, didn’t become popular in New England until the 18th century.

As for maple syrup, Native Americans of the Northeast are credited as the first to procure it; however, it’s believed that European settlers didn’t begin harvesting it until 1680.

Although it is tough to think of Thanksgiving without decadent sweets, at least the first attendees were spared the awkwardness of having to refuse dessert after such a large feast.